A Star is Born

Home Our Blog A Star is Born
Share this page

China has long been regarded as a cheap producer of low value-added consumer goods. But this has changed. Chinese companies like Tencent (social networking giant), Alibaba (world’s largest retailer and Xiaomi (the Apple of China) have grown massively, shifting perceptions.

Many economists now believe the US is lagging China in key areas like artificial intelligence (AI) semi-conductors, AI robotics and electric vehicle battery technology. Because of this significant shift the US has come to regard China as a major league technology competitor; adding fuel to already simmering trade tensions.

The new stock market, which is now in operation, has been set up along the lines of the National Association of Securities Dealers Automated Quotations, the NASDAQ exchange in the US. The role played by Nasdaq in the US has been pivotal to the US cleverly spawning many successful innovative companies; some of which have transformed into world beating companies. There are currently over 3000 stocks listed on NASDAQ, including instantly recognisable companies like Facebook, Apple Amazon, Netflix and Alphabet (Google)- the so called FAANG’s.

NASDAQ, when compared against the main stock exchange indices globally, has powered ahead: These other indices do not have such a pure and heavy exposure to technology. 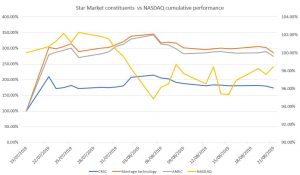 Political spats associated with China’s success in the technology space became elevated when the US Justice Department accused the Chinese company Huawei of theft of intellectual property. This makes the task of achieving a competitive advantage even more important. China wants a cache of growth enterprises to emerge and evolve through time and is intent on moving fast.

The Star Market is certainly something to watch. Broadly speaking it has a number of aims;

The Star Market provides a way of increasing accessibility for investors to deploy capital in new ideas and enterprises. It reduces state intervention and encourages entrepreneurs. In time, the Star Market will be a serious rival to NASDAQ. Investors with capital will always seek the best returns and this new star has potential to shine brightly.

Rivalry between the US and China for technological leadership will persist. This will have a positive aspect with more capital attracted to new opportunities. Increased determination will create technological advances not yet on anyone’s radar so it is game on, and we will be sure to keep you posted with any new developments.