Home Our Blog It’s an Eton Mess, or is it?
Share this page

We are 62 days away from the extended Brexit deadline of the 31st of October. In the time available our elected politicians must work out a solution. Frankly no one knows if this is possible. Prime Minister (PM), Boris Johnson is taking a harder line than his predecessor. But, at the same time, he is keeping on friendly terms; visiting key European capitals and speaking to his counterparts whenever an opportunity arises. The latest G7 meeting was one such opportunity and, footstool aside, this event passed without any typical Boris gaffes

As usual, bad news gets most attention in the media. Uproar and outrage have accompanied the PM’s recent decision to ask permission from the Queen to suspend parliament to allow a new domestic programme to be formulated and presented to parliament. The process, known as ‘prorogation’, which most of us have never heard of before, works as follows:

Some see efforts to suspend parliament as an attempt to achieve the goals of hard Brexiteers within the cabinet. They say this is without any regard for democratic integrity, leaving scant time for counter legislation measures mooted by the PM’s opponents who are attempting to counter a no deal. They angrily point out that this is the longest suspension since 1945, and undemocratic.

The move has certainly frustrated many MPs opposed to Brexit, on both sides of the House. For example, Ruth Davidson quit as the Scottish Tory leader. Although she stated in her resignation letter that the decision was mainly for family reasons it nevertheless gave the press scope to speculate whether her decision may have been linked  to Boris Johnson’s strategies

Elsewhere, the currency markets offer the best indication of investors’ perceptions on Brexit. They aren’t happy either. International investors worried by political developments have put capital to work elsewhere, causing sterling to depreciate by 8.5% vs the US dollar and 8.8% vs the Euro.

Graph: Value of GBP vs USD and EUR 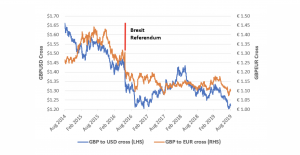 Source: Bloomberg, data as of August 2019

From experience we know that amidst bad news, good news gets buried. For example, you probably didn’t read that spending on technology in the UK is massively higher than previously reported. This has hardly been mentioned.

According to recent National Accounts (Blue Book) data, and something of an embarrassment for our statisticians, spending on software in 2016 was revised up from £13.8bn to £24.9bn.

The Blue Book 2019 now shows average growth at 6% between 1997 and 2016. This is TWICE the level reported in the Blue Book 2018. In a fast-changing technological age this staggering increase is highly significant news. It bodes well for the UK economy in an increasingly digitised world.

If we can get past the political impasse, then the UK economy has fantastic potential. Yes, we have a weak currency right now but once a way forward has been agreed by our political class, foreign direct investment will follow. In this country business innovation is underpinned by great entrepreneurs and great universities and continues to be so.

Assuming a no deal Brexit remains a likely outcome, the PM will visit Brussels between the 17th and 18th October-this time without his hands tied by Parliament. If freedom to act leads to some form of renegotiation of terms with the EU, especially so on the backstop, it will leave enough time for a new deal to pass through the Commons. If unsuccessful, the PM may have to face a vote of no confidence. Quite how this happens is uncertain. A challenge to his leadership needs several different parties to agree a new, alternative, PM. It is also possible that even if he loses a vote, Johnson could refuse to step down.

We will keep you all posted on the next developments in the negotiations. 62 days to go and counting down!